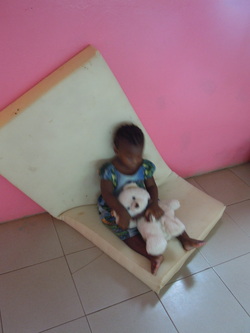 Throughout this process, I have been trying to understand the loftier notions of development and the effects of colonialism in Senegal, neither of which were the focus of my two months there. In that process, I have neglected furthering my understanding of the people with whom I spent most of my time and to whom I felt most strongly connected: children. Initially, I thought I would be analyzing children’s rights, in particular children’s protective rights. Instead, my analysis has developed more into the defense of children’s personhood and the attitudes toward and the role of children in Senegalese culture.

The study of infants and very young children is often neglected in anthropology. In fact, in her book, The Afterlife is Where We Come From, Alma Gottlieb dedicates an entire chapter to questioning this phenomenon. In the chapter, “Do Babies Have Culture?” many of the reasons she provides as to why infants are often excluded may explain my own initial aversion to recognizing children as persons as well. Gottlieb explains that infants (and by extension, young children for the purposes of this site) do not have agency when she states, “the younger the child, the more dependent she or he is on others for basic biological sustenance… They seem to be so much at the mercy of others that there doesn’t appear to be any of that push and pull between two individuals, or between the individual and society at large that makes for interesting scholarly consideration (47). Reflecting back upon the children with whom I worked, even though they were undeniably at the mercy of their caretakers and myself, this does not mean they were incapable of having distinct personalities and forming relationships. 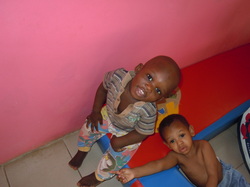 Another obstacle to the acceptance of the notion that very young children have culture is the question of whether or not they can communicate. For most cultural anthropologists, language “signals the presence of culture” (Gottlieb 52). Even if I had been fluent in Wolof, I would not have been able to verbally communicate with these children, as most of them had not begun to talk or only used very simple words. However, this does not mean that they did not understand or that we had no way of communicating. For example, the children often understood to stop misbehaving when yelled at by the maternal assistants or myself, even if they only understood tones of anger. The children and I relied heavily on non-verbal forms of communication: gestures, sounds, facial expressions, and touch. Reaching some point of empathy and understanding can be achieved through other forms of communication. As Gottlieb asserts, “it may be no more impossible to gain some level of rapport with a tiny nonspeaking person, and some level of understanding of his or her experiences, than it is to do so with a full grown one” (53). My partner and I agreed that by the end of the eight weeks, we knew many of the children’s various personalities, most were able to distinguish me from other toubabs, and some even had developed more personal relationships with us.

Additionally, the socialization of children is important when considering whether or not children have culture, as how they begin to socialize reflects what they perceive to be normal human interactions and behaviors within their own society. On days that we would take my section on walks, they would see the women with their children waiting in line for the free clinic. After we had re-entered the toy room, children would often approach me with stuffed animals and point to either their backs or stomachs, signifying where they wanted the toy to be placed. They were simulating the act of a mother carrying a child on her back or pregnancy, depending on the choice of the toy’s location. However, they had not quite learned the gender-association with this behavior, as boys also participated. The girls would attempt to wrap their cloth diapers around their heads, simulating the foulards of their caretakers. These examples illustrate how Senegalese children as young as one-and-a-half to two begin to understand the cultural scripts of their society and how to function within it.

The children not only learned to socialize from the adults, but also from each other. According to Patricia Marks Greenfield, many children “learn culturally appropriate forms of behavior and thought systems primarily through ‘hands-on’ socialization, more under the mentorship of older siblings and peers than of parents or other adults”(140). These children learned how to explain their needs by replicating others. For example, whenever a toubab entered the room, the children who knew how to walk quickly learned to approach the door with their arms up, as this increased their chances of being held, a behavior learned through observation. A second example concerns a child with whom I was particularly close, Mohammed[1]. He was typically very well behaved, and I would often stop paying attention to him to address another child who was misbehaving. Eventually, he began to disobey me more often, resulting in me paying more attention to him. Of course, this correlation does not necessarily imply causation, but I do feel that it is a plausible explanation for his sudden change in behavior. The children learned from one another how to address their need for attention, which demonstrates a rudimentary capability of critical thinking.

Infants and children have many of the same needs as adults, including food, water, and shelter, but also deeper and more abstract needs, such as human interaction, physical contact (Barnett), and the desire to be loved. Children should not be considered non-subjects, but persons with needs, desires, and emotions just like us. Gottlieb states that “[r]ight from the start, infants demand to be accounted for,” an idea we should take into account when considering the personhood of children (48). Children need to be viewed as members of their culture, for reasons of child development, human dignity, and anthropological purposes. Children learn by example: if we are violent, they become violent; if we show them love, they learn how to love. This idea is especially important in the cases of orphanages, where children are at more at risk to not receive enough attention and to be at the receiving end of punitive or abusive violence.

Gottlieb, Alma. The Afterlife Is Where We Come From: The Culture of Infancy in West Africa. Chicago: University of Chicago, 2004. Print