Talibés: Children on the Streets

“Madame,madame, cinquante francs.—Fifty francs please.” The small boy shakes his yellow plastic bowl, hoping for a few coins. “Donne-moi un cadeau—Give me a gift.” My heart breaks as I look into his big brown eyes and say, “Je n’ai rien aujourd’hui. Je suis désolée.—I have nothing today. I’m sorry.” He moves on, walking barefoot in the hot sand in his dirty, tattered clothes. I’m not sure, but I think I see long thin wounds through the holes in his clothing. Should I have given him money? Water? Food? Something? 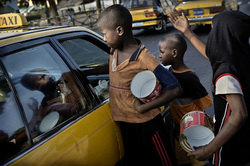 Credit: Human Rights Watch
Everyday I walked past these children as they begged for money on the streets, some no older than 5 or 6 years old. They are called talibés. Talibés are children that are forced to beg on the street during the day in exchange for Quranic education at night. They are taught by religious leaders called marabouts, who require them to bring back a certain amount of money, rice, or sugar by the end of the day. If they do not meet their teacher’s quota, they risk being beaten, often times with an electrical cord or other object. Sometimes they beg for over 10 hours a day. They live and learn in schools called daaras, which are typically overcrowded and provide inadequate protection from the elements. This traditional practice has only become a human rights concern in recent years. It is exploitative practice akin to slavery according to some human rights organizations. 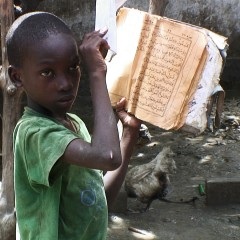 Although Senegal is secular country, Muslim brotherhoods heavily influence Senegalese life and culture. The form of Islam practiced in Senegal draws from Sufism. While not a sect, Sufism is a mystical form of Islam that emphasizes inner spirituality rather than legalism.

These Muslim brotherhoods maintain a hierarchy as follows:

Talibés are expected to be extremely obedient and devoted in return for the guidance of the Marabout. Before French rule, the Quranic schools taught by the Marabout, or daaras, were the main form of education. Both boys and girls studied the Quran, but typically only boys were entrusted to the care of marabouts, often moving away from their villages to daaras elsewhere.

Up until about three decades ago, most marabouts also cultivated the land in addition to teaching the talibés. The dry season was reserved for the study of the Quran. The marabout and talibés would work the land during the harvest season to provide food for the daara. The community would often contribute to the daaras through almsgiving. Begging would only occur if there were not enough food. The main focus of daaras was education.

It was not until after independence from the French in the 1960’s that forced begging became prevalent. In the 1970’s, severe droughts forced marabouts and consequently daaras to move from villages to urban areas, where the same community support did not exist. As a result, marabouts began to force talibés to beg, leading to the abusive circumstances we see in daaras today. 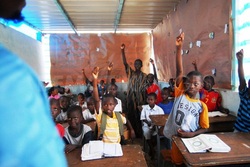 Modern Daara Credit: Aliou Mbaye
According to Matthew Wells, writer of the Human Rights Watch Report, Off the Backs of the Children: Forced Begging and Other Abuses against Talibés in Senegal, there are four different kinds of daaras:

Village Daara: Present in most Senegalese villages, it focuses on study of the Quran. Children typically live at home and attend both state school and the daara each day. Children who live with the marabout help with cultivation.

Seasonal Daara: Almost nonexistent presently. During the dry season, marabouts and talibés live in urban areas where the children are forced to beg. During the harvest season, the marabout and talibés usually return to the village to cultivate the fields.

Urban Daara with Few or No Talibés Residing at the Daara: Usually led by imams. Children live nearby with their families and typically also attend state school. Children are normally not forced to beg.

Urban Daara with Talibés Residing at the Daara: This is the typical form found in cities. Children come from rural areas in, usually from within Senegal and Guinea-Bissau to learn from a marabout. With no other sources of funding, marabouts typically force these talibés to beg for long hours. Some of these daaras spend very little time on Quranic education.

“Modern” Daara: Very few of this form exist. Talibés study subjects in addition to the Quran and Arabic, including French. Almost no forced begging occurs in these daaras because they are funded by enrollment fees, religious authorities, the state, foreign aid, and humanitarian agencies.

What is being done

Credit: talibes.centerblog.net
There are organizations such as La Maison de la Guerre that help to support talibés by providing a safe environment, health and hygiene, and literacy classes. The increasing prevalence of "modern" daaras helps to encourage non-exploitive practices and focuses on educating the talibés, the original goal of most daaras. Some organizations separate from daaras offer literacy and vocational programs, that will allow talibés to function as adults in Senegalese society.

Continued pressure needs to be placed upon the governments of Senegal and Guinea-Bissau to prevent the abuse, exploitation, and child trafficking of talibés. Communities also need to put pressure on marabouts who force children to beg and provide inadequate living and learning environments. Any aid that is given to support talibés should be given to humanitarian organizations rather than directly to the marabouts, who might not use it to improve conditions in daaras.
Wells, Matthew. "Off the Backs of the Children": Forced Begging and Other Abuses against Talibés in Senegal. New York: Human Rights Watch, 2010. Print.