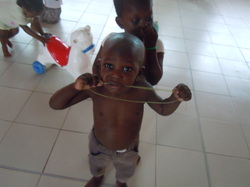 In Senegal, 9% of children (402,000 children) ages 0-14 are orphans, meaning that they are missing one or both of their birth parents (Guarcello 4).  On top of that, about ten percent of 5-14 year olds are fostered, meaning they live outside their parents’ household, typically with other family members. Children in orphanages are vulnerable for various reasons. However, one of the greatest risks children in orphanages experience is being denied schooling. According Guarcello, children without both parents are six percentage points more likely to not attend school, whereas children with only one parent are three percentage points more likely to not attend school. Over a third of primary school-aged children are not in primary school, and less than half of children complete primary school.

The Vivre Ensemble website (French) states that the Pouponnière is for very young children, newborns to one year of age. In reality, there are children as old as three, due to overcrowding in the orphanage and increased need.

Vivre Ensemble is not a typical orphanage. Not all children are orphans. In fact, many of the children have one (typically the father) or both parents. The children often come from families who cannot financially provide for them, especially in terms of providing food appropriate to their age. This is especially prominent during the first three years of life, where formula, vaccinations, diapers, and food are often too heavy of a financial burden. The mothers of many of the children had died during childbirth or are too sick to care for their children. The majority of the children return to their families around 2 or 3 years of age, when the child is more independent and the financial burden is less.

In some situations, the mother feels that she cannot adequately or safely provide for her newborn child, and thus places the child in the care of the orphanage until she is in a better situation. Some of the reasons that a mother may choose to place her child in the orphanage include the following:

Only a minority of children in the orphanage are "found" (meaning that their parents abandoned them), or their mothers cannot take care of them due to incarceration, sickness, or a handicap.

Risks of living in an orphanage 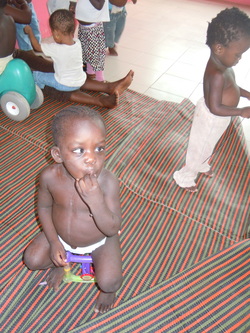 Child with developmental delays
There are many risks to children who live in orphanages, especially those that are overcrowded and understaffed. According to a study performed by Deborah Frank and Perri Klass in American orphanages, children in orphanages are at five areas of potential biologic and social risk (1):
Of these risks, I witnessed evidence of all except for sexual abuse within the orphanage at Senegal. It is important to note that I do not necessarily blame the caretakers, or maternal assistants, for this situation. The orphanage is overcrowded, with cribs covering every wall. There are typically only 4-6 caretakers for 30-40 children in each section. It is difficult to make sure children get absolutely everything they need when placed in such a situation.

Infectious Morbidity: If one child became sick in a section, many of the others did at well. At one point there was two-week span where almost every child in my section had diarrhea. Scabies was also very prevalent. There was an isolation room in the infirmary, but sick children were not always detected early enough.

Nutrition and growth: Many of the children were developmentally behind physically. In one situation, a young infant died while I was there, due to malnutrition. Children were typically only given water at meals, and if a child dropped his or her water cup, he or she was usually not given more. The children would often try to drink from faucets when being bathed, which I interpreted as evidence of thirst.

Cognitive Development: If nothing else, the toddlers with whom I worked were developmentally behind in terms of language learning, one aspect of cognitive development. The children in my section ranged in age anywhere from 18 months to 2.5 years. By the end of 24 months, a child should have a speaking vocabulary of about 50 words, but understand more (Mayo Clinic). Many of the children at the age of 24 months were still only babbling repetitive syllables or trying to imitate words, milestones that are reached by the end of 12 months. However, most children were able to understand simple commands with gestures, a milestone on par with their age.

Socioaffective development: The impersonal institutional upbringing of a child in an orphanage can affect his or her socioaffective development. According to Frank and Klass, the “continuity of relationship to parent figures is especially important in the first few years of life…children most at risk are those who experience multiple changes of parent figures or who are reared institutions with many attendants who have no special responsibility for individual children (8). The children in this particular orphanage had very little individual attention over long periods of time. Caretakers rotate different shifts throughout the day, and as children grow older and “graduate” into older sections, these caretakers do not move up with them. There is also a high turnover of caretakers as the job is very stressful. The orphans have very little consistency in their lives in terms of parental figures, putting their socioaffective development at risk.

Physical abuse: It is not clear whether or not the children in the orphanage were physically abused. Punishments ranged from light taps on the back to being hit or whipped with electrical cords. It is difficult to know where a line has been crossed from corrective to abusive. 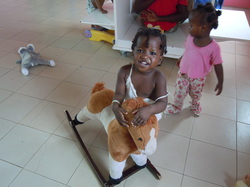 In Sub-Saharan Africa, over 6 million children have become orphans as a result of HIV/AIDS. However, Senegal has become the “African success story” in controlling the spread of HIV/AIDS (Guarcello 1). HIV prevalence is only 1.4% among adults ages 15-49. In comparison to other West African nations, Senegal has a relatively low number of children orphaned due to AIDS, about 15,000 children. Only 4% of total orphan cases are a result of parental death from AIDS, making AIDS a minor contributor to the orphan crisis in Senegal. 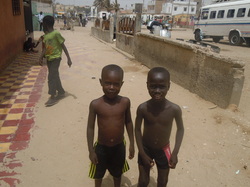 Effects of Orphanhood on Children and Families 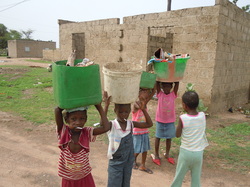 Young girls helping with household chores
According to Guarcello, the death of a parent affects children in terms of how they must allocate their time, especially if they remain in the household with the surviving parent. Children may have to spend more time helping to generate income, produce food, perform chores, and care for other family members. Because a loss of a parent, especially if it is the father, leads to less income and most schools in Senegal are not free, families may not be able to afford both the monetary and time costs of schooling. If a child loses both parents and is fostered into a new home, this may create an additional financial burden, which they may be expected to make up for, either through working outside of the home or household chores.

Females orphans are more likely to miss out on schooling than male orphans. This loss of opportunity affects children in terms of their security and continuity and their procurement of skills needed for adulthood (Guarcello 5).